How to Prepare for an Earthquake: Waiting for the "Big One"

If you've read the news, you'll hear scientists talking about "The Big One." No, they are not talking about the next superstar, but rather the earthquake that is supposed to shake Southern California so hard that it is rumored to break from the continental United States.

Anyways, "The Big One" is supposed to have happened "tomorrow" for the last 10 years. Unfortunately, it is nearly impossible to estimate when an earthquake is about to give because we cannot measure exactly how much pressure and tension the tectonic plates can take. All we know is that there is going to be a horrible earthquake in the "near" (and by near we mean within the next 2 days - 100 years) future.

If you live near a fault line in Southern California, you should constantly be prepared for "The Big One." If you live along the San Andreas fault, hopefully you are well aware about the risks to your area if an earthquake strikes and have your house and workplace checked for the most updated earthquake building regulations. 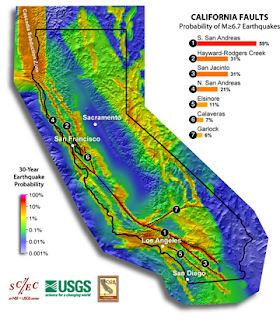 Like in any natural disaster emergency situation, you always want to have canned food on hand as well as a lot of bottled water. These keep forever, so stock up in your garage. It also might be a good idea to keep a secret stash of cash around your house hidden in various locations in case you need to get away. We have seen in natural disasters like Hurricane Katrina where havoc broke loose and people were looting stores, etc. In case you want to fly to another city or get out of town after the disaster, it is a good idea to stash cash around your house.

If you are very paranoid about earthquakes, don't hang heavy objects above your bed (in case they fall on you while you're sleeping) and only put heavy objects on the bottom shelves of your bookshelf because those are known to topple over as well in the middle of earthquakes. You want to keep all valuables in a safe place where they will not be broken and keep any heavy and sharp objects away from areas where you rest (like a near bed or a couch).

In the Event of an Earthquake

Stop, drop and roll? No, that's in the case of a fire. During an earthquake you want to duck, cover and hold. You want to get under a sturdy table or desk that will not crush you if something falls on it, cover your neck and face (crouched over on your knees) and hold on to the leg of the object. Can't find something to get under? Stand in an archway of a door. Those are strong enough to support you. Try to stand in the archway of a door that is as wide as you are for maximum protection.

Stay away from anything sharp, pointy or breakable. Steer clear from windows, pictures hanging on walls, heavy arches and heavy pillars.

If you are outside, get away from anything that can fall on you like a tree or light post. If you are in your car, get out of your car and move to a clear area (yes, leave the Ferrari behind and run for your life).

Stay calm! Panicking and running around like a chicken with its head cut off is not the way to handle an earthquake (especially "The Big One"). Get everyone you love safe and together (including pets) and make a game plan. If you have children it is probably a good idea to go over the plan before the earthquake. Just like families have an evacuation drill in the case of a fire, it is a good idea to have a plan in the case of an earthquake.
Posted by Amy at 4:54 PM

Email ThisBlogThis!Share to TwitterShare to FacebookShare to Pinterest
Labels: earthquake, expert tips, how to, safety