How to Prepare for a Tsunami after the Japan Earthquake

On March 11, 2011 at 2:46 pm local time, the largest earthquake to hit Japan within the last 100 years struck offshore. The earthquake was a record 8.9-magnitude on the Richter Scale. This provoked a tsunami over 30 feet high to sweep across Japan demolishing everything in its path. Hundreds of people are reported dead with hundreds to thousands more missing. Thousands are displaced, and Prime Minister Naoto Kan said that the earthquake caused "tremendous damage over a wide area." Tokyo Disneyland has officially been covered completely by the tsunami.
What is a tsunami and what causes it?
The earthquake's epicenter was about 230 miles (370 kilometers) offshore from Tokyo. More than 30 aftershocks took place after the initial quake with the biggest aftershock measuring at 7.1-magnitude. The most sensational images include patches of fire floating on top of the waves and a gigantic whirlpool taking place out in the ocean.
Japan Dominates Social Media
As of 9:30 am Pacific, Twitter has blown up with trends about the Japan disaster. Japan occupies 7 of the 10 spots of the WorldWide Twitter Trends. 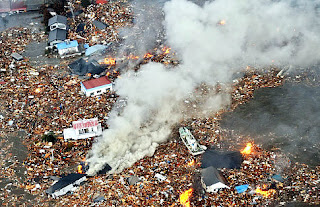 The United States Google Trends searches are mostly focused on news sites and coastal cities in states like California, Hawaii and Oregon. Crescent City, CA tops the hot searches in the United States since officials have issued the tsunami warning sirens.
Tsunami Warnings in the United States: How to Prepare
Reports have been shown saying that the western coast of the United States is at risk for aftershocks and mild tsunamis. Check to see if you are living in a tsunami zone and if you are at risk. The best way to avoid a tsunami is to move to higher ground. Geographers suggest that the oceans will only rise 2-6 feet, but if you are living on the coast, you probably would want to move inland and keep an eye on the news. Keep a stash of clean water whether you have bottled water or some sort of filter. In times of a tsunami, there is plenty of water, but hardly any access to clean water.
Also, see our article about how to prepare for an earthquake to make sure you are ready in case an earthquake and potential tsunami hits like it did in Japan on March 11 in the United States.
Posted by Amy at 9:58 AM No comments: