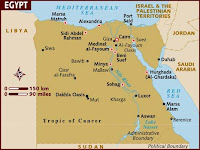 The uprising in Egypt is not showing any signs of dying down, especially after the Egyptian government flipped the kill switch in order to prevent communications on social networks, websites, and blogs with details on the protests. More than 80% of the country is without internet, making resources such as ham radios, Morse code, and dial-up internet a necessity to communicate.
Posted by Amy at 11:56 AM