Revealing Jackie Kennedy Tapes Show a Different Side of "Camelot" 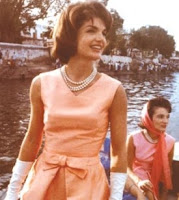 Jacqueline Kennedy Onassis is undoubtedly one of the most beloved and famed First Ladies of the White House. Although her stay in the presidential residence was cut short with the assassination of her husband President John F. Kennedy, she managed to record eight hours of audio just four months after the tragic event.

These audio tapes have been saved in the Kennedy presidential library and recently were released by her daughter Caroline Kennedy to mark the 50th anniversary of the Kennedy presidency, despite Jackie's request that the tapes were private until 50 years after her death.

Jackie O's Reveals a Skewed Perception of Self

Jackie Kennedy reveals at the beginning that she felt as though she was a political liability to the Kennedy campaign for presidency referring to herself as a "dud" and feeling depressed about being made fun of for her pillbox hat and bouffant hairstyle which later became trends once she established herself as a style icon for women in the 1960s... Read More About Whom Jackie O. Critiques.
Posted by Amy at 4:59 PM